Hit the link. Just a little truth about the breed and stating that we are Americas Breed. 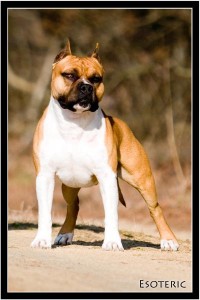 General Appearance: The American Pit Bull Terrier is a medium-sized, solidly built, short-coated dog with smooth, well-defined musculature. This breed is both powerful and athletic. The body is just slightly longer than tall, but bitches may be somewhat longer in body than dogs. The length of the front leg (measured from point of elbow to the ground) is approximately equal to one-half of the dog’s height at the withers. The head is of medium length, with a broad, flat skull, and a wide, deep muzzle. Ears are small to medium in size, high set, and may be natural or cropped. The relatively short tail is set low, thick at the base and tapers to a point. The American Pit Bull Terrier comes in all colors and color patterns. This breed combines strength and athleticism with grace and agility and should never appear bulky or muscle-bound or fine-boned and rangy.

Characteristics: The essential characteristics of the American Pit Bull Terrier are strength, confidence, and zest for life. This breed is eager to please and brimming over with enthusiasm. APBTs make excellent family companions and have always been noted for their love of children. Because most APBTs exhibit some level of dog aggression and because of its powerful physique, the APBT requires an owner who will carefully socialize and obedience train the dog. The breed’s natural agility makes it one of the most capable canine climbers so good fencing is a must for this breed. The APBT is not the best choice for a guard dog since they are extremely friendly, even with strangers. Aggressive behavior toward humans is uncharacteristic of the breed and highly undesirable. This breed does very well in performance events because of its high level of intelligence and its willingness to work. The American Pit Bull Terrier has always been capable of doing a wide variety of jobs so exaggerations or faults should be penalized in proportion to how much they interfere with the dog’s versatility.

Head: The APBT head is unique and a key element of breed type. It is large and broad, giving the impression of great power, but it is not disproportionate to the size of the body. Viewed from the front, the head is shaped like a broad, blunt wedge. When viewed from the side, the skull and muzzle are parallel to one another and joined by a well defined, moderately deep stop. Supraorbital arches over the eyes are well defined but not pronounced. The head is well chiseled, blending strength, elegance, and character.

Skull – The skull is large, flat or slightly rounded, deep, and broad between the ears. Viewed from the top, the skull tapers just slightly toward the stop. Thereis a deep median furrow that diminishes in depth from the stop to the occiput. Cheek muscles are prominent but free of wrinkles. When the dog is concentrating, wrinkles form on the forehead, which give the APBT his unique expression.

Muzzel – The muzzle is broad and deep with a very slight taper from the stop to the nose, and a slight falling away under the eyes. The length of muzzle is shorter than the length of skull, with a ratio of approximately 2:3. The topline of the muzzle is straight. The lower jaw is well developed, wide and deep. Lips are clean and tight.

Teeth – The American Pit Bull Terrier has a complete set of evenly spaced, white teeth meeting in a scissors bite.

Serious Faults: Undershot, or overshot bite; wry mouth; missing teeth (this does not apply to teeth that have been lost or removed by a veterinarian).

Nose – The nose is large with wide, open nostrils. The nose may be any color.

Eyes – Eyes are medium size, round to almond-shaped, and set well apart and low on the skull. All colors are equally acceptable except blue, which is a serious fault. Haw should not be visible.

Ears – Ears are high set and may be natural or cropped without preference. If natural, semi-prick or rose are preferred. Prick or flat, wide ears are not desired.

Neck: The neck is of moderate length and muscular. There is a slight arch at the crest. The neck widens gradually from where it joins the skull to where it blends into well laid-back shoulders. The skin on the neck is tight and without dewlap. Faults: Neck too short and thick; thin or weak neck; ewe neck; dewlap.

Forequarters: The shoulder blades are long, wide, muscular, and well laid back. The upper arm is roughly equal in length to the shoulder blade and joins it at an apparent right angle. The forelegs are strong and muscular. The elbows are set close to the body. Viewed from the front, the forelegs are set moderately wide apart and perpendicular to the ground. The pasterns are short, powerful, straight, and flexible. When viewed in profile, the pasterns are nearly erect.

Faults: Upright or loaded shoulders; elbows turned outward or tied-in; down at the pasterns; front legs bowed; wrists knuckled over; toeing in or out.

Body: The chest is deep, well filled in, and moderately wide with ample room for heart and lungs, but the chest should never be wider than it is deep. The forechest does not extend much beyond the point of shoulder. The ribs extend well back and are well sprung from the spine, then flattening to form a deep body extending to the elbows. The back is strong and firm. The topline inclines very slightly downward from the withers to a broad, muscular, level back. The loin is short, muscular and slightly arched to the top of the croup, but narrower than the rib cage and with a moderate tuck-up. The croup is slightly sloping downward.

Hindquarters: The hindquarters are strong, muscular, and moderately broad. The rump is well filled in on each side of the tail and deep from the pelvis to the crotch. The bone, angulation, and musculature of the hindquarters are in balance with the forequarters. The thighs are well developed with thick, easily discerned muscles. Viewed from the side, the hock joint is well bent and the rear pasterns are well let down and perpendicular to the ground. Viewed from the rear, the rear pasterns are straight and parallel to one another.

Feet: The feet are round, proportionate to the size of the dog, well arched, and tight. Pads are hard, tough, and well cushioned. Dewclaws may be removed.

Serious faults: *beep* tail (not to be confused with challenge tail); kinked tail.

Coat: The coat is glossy and smooth, close, and moderately stiff to the touch.

Color: Any color, color pattern, or combination of colors is acceptable.

Gait: The American Pit Bull Terrier moves with a jaunty, confident attitude, conveying the impression that he expects any minute to see something new and exciting. When trotting, the gait is effortless, smooth, powerful, and well coordinated, showing good reach in front and drive behind. When moving, the backline remains level with only a slight flexing to indicate suppleness. Viewed from any position, legs turn neither in nor out, nor do feet cross or interfere with each other. As speed increases, feet tend to converge toward center line of balance.

General Impression: The American Staffordshire Terrier should give the impression of great strength for his size, a well put-together dog, muscular, but agile and graceful, keenly alive to his surroundings. He should be stocky, not long-legged or racy in outline. His courage is proverbial. 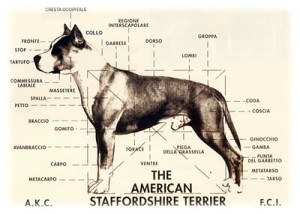 Head: Medium length, deep through, broad skull, very pronounced cheek muscles, distinct stop; and ears are set high. Ears – Cropped or uncropped, the latter preferred. Uncropped ears should be short and held half prick or rose. Full drop to be penalized. Eyes – Dark and round, low down in skull and set far apart. No pink eyelids. Muzzle – Medium length, rounded on upper side to fall away abruptly below eyes. Jaws well defined. Underjaw to be strong and have biting power. Lips close and even, no looseness. Upper teeth to meet tightly outside lower teeth in front. Nose definitely black.

Neck: Heavy, slightly arched, tapering from shoulders to back of skull. No looseness of skin. Medium length.

Shoulders: Strong and muscular with blades wide and sloping.

Back: Fairly short. Slight sloping from withers to rump with gentle short slope at rump to base of tail. Loins slightly tucked.

Tail: Short in comparison to size, low set, tapering to a fine point; not curled or held over back. Not docked.

Legs: The front legs should be straight, large or round bones, pastern upright. No resemblance of bend in front. Hindquarters well muscled, let down at hocks turning neither in nor out. Feet of moderate size, well-arched and compact. Gait must be springy but without roll or pace.

Coat: Short, close, stiff to the touch and glossy.

Color: Any color, solid, parti, or patched is permissible, but all white, more than 80 percent white, black and tan and liver not to be encouraged.

Size: Height and weight should be in proportion. A height of about 18 to 19 inches at the shoulders for the male and 17 to 18 inches for the female is to be considered preferable.

Faults: Faults to be penalized are Dudley nose, light or pink eyes, tail too long or badly carried, undershot or overshot mouths.

Nose “definitely black”: Before AKC registration, there were registered American Pit Bull Terriers with red noses. These dogs came from different root stock and had a different appearance – including liver coloration. The intention here was to prevent them from entering the AKC breeding pool of American Staffordshire Terriers. The nose should be black – not red or pink. We now know that it is genetically impossible for a blue dog to have a black nose, yet there were blue Am Staffs then, as now, and they were shown and finished championships. The nose should appear darkest charcoal on dogs with blue dilute coloration. Forgiveness can be made for dark charcoal on this color, but the darker the better. The nose should still appear as black to the observer. A dudley nose (flesh coloured) is listed as a fault. For dogs without dilute coloration the nose must appear as written – definitely black. – Staffordshire Terrier Club of America Inc. 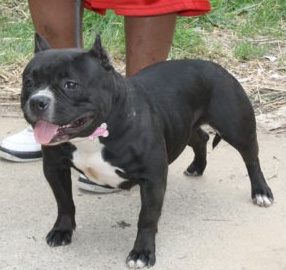 WHAT IS A POCKET STYLE PITBULL?

A pocket style pitbull is a version of the American bully. The American bully has different standards and the pocket class is one of them. It is basically is a more compact style dog short smaller dog. But still has substance.

Here is the Abkc’s standard of the pocket  American bully.

Here at steelhead pits we have a few dogs that fit in the pocket class. Here we will show you some pictures of the pocket pitbulls. 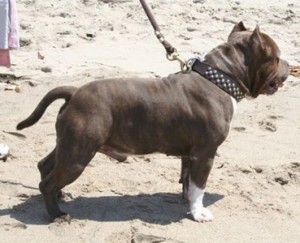 This is Paco not owned by Steelhead pits