The American Bully should give the impression of great strength for its size. Compact to medium/large size dog with a muscular body and blocky head. Powerful in its movement and should display effortless movement at the same time. Keenly alive and alert to its surroundings. The American Bully should have the appearance of heavy bone structure with a Bully build and look.

The American Bully is a companion breed exhibiting confidence, a zest for life, along with an exuberant will to please and companionship with their family. This making the American Bully an excellent family companion. Despite the American Bully’s fierce and powerful appearance their demeanor is gentle. They are great with kids, and extremely friendly with strangers, other dogs, and other animals. Human or dog aggression, extreme shyness, or viciousness is very uncharacteristic of the American Bully and is highly undesirable.

• Ears- Set high and can be either natural or cropped.

• Eyes- All colors equally accepted except blue eyes which is a fault and albinism (pinkish to red), which is a disqualification. Lack of pigment around the eyes is undesirable. Eye shape is oval to slightly roundish, low down in skull and set far apart. Visibility of the haw should be minimal.

Serious Faults: Both eyes not matched in color.

• Muzzle- Short-Medium in length and broad in width. Length to be shorter than the length of the skull measuring 25% to 35% (1/4 to 1/3) of the overall length of the head. The muzzle is blocky or slightly squared to fall away abruptly below eyes. The topline of the muzzle is to be straight with nose neither pointed nor turned up in profile.

• Under jaw- to be strong and parallel to muzzle, never turning upward.

• Lips- semi close and even, some looseness accepted (more so with the XL and Extreme varieties) but not preferred.

Faults: Muzzle too long or snipey; lack of pronounced, deep stop; weak under jaw; under jaw turning up; nose turning up or pushed back; excessive flews.

• Nose- all colors acceptable except albinism (light pink in color). 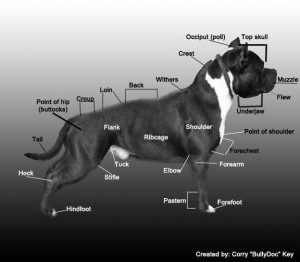 • Heavy, muscular, slightly arched, tapering from shoulder to back of skull. Compact to medium size should have minimal or no loose skin (some looseness of skin is accepted with the XL and Extreme varieties).

Faults: Neck too thin or weak; neck too short or too long.

• Shoulders to be strong and muscular with wide blades set wide; and well laid back. The upper arm is approximately equal to the length of the shoulder blade and joined at an angle of approximately 35 to 45 degrees.

• Front legs- straight from legs, large or round bones, pastern are short and nearly erect.

• Feet- slight turning outwards is accepted as long as feet do not measures a 45 degree.

• Heavily muscled, massive “Bully” body type of compact/medium length giving the impression of great power for its size and exemplifying the breed type of the American Bully.

• Well-sprung ribs, deep in rear and all ribs close together; rib cage to extend to the elbow.

• Chest- should be deep, broad and well filled in.

• Fairly short to medium back, slight sloping from withers to rump or straight accepted with gentle short slope at rump to base of tail. (slightly higher rears accepted for XL and Extreme varieties) but not desired in the compact medium size. The American Bully should give the appearance of a square body, equal in length when measured from point of shoulder to point of buttocks and from the withers to the ground.

Faults: Back too long; rear higher than withers; weak or swayed topline; roached or wheel back.

• Well-muscled, let down at hocks, turning neither in nor out (slight turns accepted in the XL and Extreme varieties).

• Muscular development, angulation and width of the hindquarters should be in balance with that of the forequarters.

• When viewed from the rear legs are to be straight and parallel.

• Croup should have a slight downward angle.

Faults: Hocks turning in or out (slight turn out accepted in the XL and Extreme varieties).

• Medium in comparison to size, low set, tapering to a fine point and extending approximately to the hock.

• When relaxed tail is to be carried low. When moving tail is carried level with the topline or in a raised position when excited (challenge tail), but should never be carried curled over, breaking the plane of the back (gay tail).

• Tail to be clear of any kinks, knots or any curvature.

Faults: Tail to long or too short approximately up to an inch above or below point of the hock.

Gay tail (carried over the plane of the back).

• Should be of moderate size, compact, well arched and tight.

• Short, close, stiff to the touch and glossy.

• All colors and patterns are permissible except the color merle.

• Dogs should be healthy and should NOT reach the point where it is considered obese.

• Weight- There is no particular weight for the breed.

• Height and weight should be in proportion of the body frame.

• Should be effortless and powerful. The action must, however, be unrestrained, free and vigorous with powerful drive off the rear. (Some paddling and lumbering accepted in XL and Extreme varieties), but not preferred in compact to medium.

• Front and rear reach should be moderate and in balance with one another.

• Legs turn neither in nor out, nor every cross or interfere with each other.

• Backline should remain level, with flexing to be very slight.

Faults: Rolling; pacing; sidewinding; hackney action; paddling or pounding (exception in the XL and Extreme varieties where some is accepted). Not moving o the same plane; legs over reaching; legs crossing over in front or rear; rear legs moving too close or touching.

Faults to be penalized but not disqualifications for showing are:

• Muzzle too long or snipey

• Albinism nose (light pink) Nose turning up or pushed back.

• Tail too long or too short (approx. 1″ from point of hock)

• Neck too thin or weak

• Neck too short or too long

• Severe turned fronts (in or out)

• Down at the pasterns (weak pasterns)